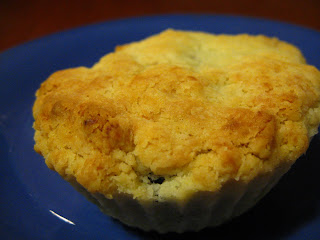 My go-to way to enjoy lychees is to blend them in a simple smoothie = one can of peaches including juices + one can of lychees including juices. [Did you get that bonus recipe?] Once I requested a lychee-peach blend at the best bubble tea place in Vancouver. I laughed when the woman obliged, but only after a stern disclaimer, "We don't guarantee it will taste good." I bet the regular Asian clientele doesn't usually order off the proven menu.

The accidental discovery of the fabulous marriage of lychees and blueberries: During one spontaneous visit, I offered my guest a smoothie. I had a can of lychees, but no peaches. What about trying the frozen blueberries? What a delicious surprise!

Lychees are fragrant, but subtle enough to complement other foods, even savoury ones. One Thai restaurant cooks lychees in their tasty ostrich curry!

Inspiration #2: Beyond Savoury, to Sweet Dumplings
Once my neighbour celebrated her birthday with Chinese dumpling wrapping (and gorging) party. We wrapped, pan fried, and ate Chinese savoury dumplings to our hearts' content.

For dessert, at the lead of a non-Asian guest, we filled the leftover dumpling wraps with a sweet filling of fruit. Apparently it's a European dessert. We pan fried them and they were delish!

This year for Chinese New Year, we received a last minute invitation to another neighbour's dumpling party. Desiring to bring food, but too lazy to go shopping, I searched my kitchen. Lychees and blueberries! We wrapped blueberry-lychee dumplings for dessert. We steamed them, but they didn't quite taste right. Pan fried worked better!

So with the leftover blueberry-lychee filling, and knowing deliciousness comes with fried, greasy goodness, I experimented with it as a pie filling. 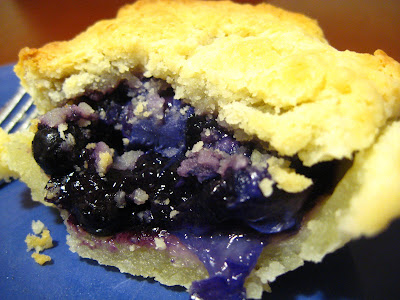 Guidelines for Blueberry Lychee pie (Use as a starting point, not a precise recipe. I can't part from my fluid artsy ways ;)
Pie crust recipe is found here (thanks to Dilys for pointing me there!)
Filling Ingredients (with possible substitutions)
Sweeten to taste with sugar (or alternative sweeter, like Stevia or agave). I didn't add any sweetener, because the canned lychees contain enough sugar. You could use fresh lychees if you're trying to go sugar free.
If you're gluten free, try a crumble topping, with quinoa or millet flour instead of a wheat pie crust. 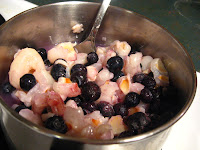 The substitutions are endless! Try other fruits, like peaches to go with the lychees. As long as you have about 4 cups of fruit you could change up the ratios and put more lychees, if you want to experiment with stronger lychee flavour.
The Method: 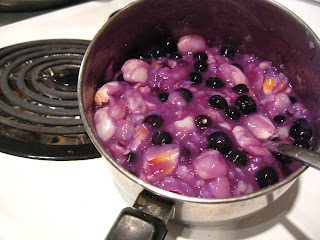 See how un-precise I am? I can't even give you a time to bake, based on your pie format. This recipe made me 10-12 little pie crusts, the size of individual muffins, which I baked for 20 minutes in my convection oven (I pressed the pie dough into silicon muffin liners). But the pie crust recipe is enough for a 9 inch pie. Bake longer for one large pie. That's why I stick with the "golden brown" rule.
Have fun and let me know how it goes!

I love your non-precise artsy tendencies. Hehehe. I've never tried lychee and blueberries together, have to admit!